How to Start a KFC Franchise in India 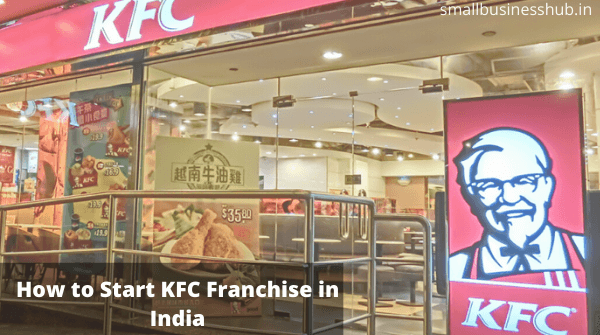 KFC is the second-largest restaurant chain in the world after McDonald’s. It has approximately 23,000 outlets globally in around 140 countries.

The American fast-food chain is growing pillar-to-pillar from its first franchise restaurant in 1952 to now having a presence in over 140 countries.

For the last 67 years, it has been disrupting the fast-food industry with its signature chicken fries.

The chain is a subsidiary of Yum! Brands, a restaurant company that also owns food chains like Pizza Hut, Taco Bell, and Wing Street.

Full form of KFC and More

KFC full form is ‘Kentucky Fried Chicken’. Kentucky is a south-eastern state in the USA.

KFC entered the Indian restaurant industry in June 1995, with a two-story outlet on Brigade road in Bangalore.

The brand started its franchising model in 2002 and in 2015 they re-organized the business under well-capitalized and larger franchisees.

Today there are 400 KFC outlets all over India across 100 cities.

The company has adopted the standard KFC offerings with an Indian taste.

How KFC Franchise Works in India

In India, KFC operates both in Equity owned and Franchise owned model.
Right now it is directly operating 10% of its 400 outlets, the remaining 90% is currently operated by a franchise model.

As you know, KFC is Yum!’s largest brand in India, followed by Pizza Hut and Taco Bell.

Out of these three, Burman hospitality is the master franchise for Taco Bell Brand.

So, if you are an individual, then getting a KFC Franchise in India would not be an easy task.

In the F&B industry, since decades KFC has been successful in maintaining its brand value. As a result, getting a KFC franchise would be an expensive deal.

To start a KFC franchise in India, you may require an investment of 1 to 2 crores with a 1,000 – 1,500 Square feet commercial space that meets their guidelines. And there will be a 4-5% royal commission on the actual sales.

In 2015, KFC re-organized its franchisee network and now they mostly deal with larger franchises.

Even though, if you have a good financial background and strong experience in retail/food industry, you can still apply for the Franchise

Every franchise has its own terms and conditions. These are the few T&C usually followed by most of the brands in the F&B industry.

• The agreement may allow the franchisor to change its business model without franchisee consent. These changes may require you to make additional investments in the business.

• You may be required to buy items from the franchisor or suppliers the franchisor designates. These items may be more expensive than similar items you could find in your network.

• You may have to pay royalty commission and other fees even if your business is in loose.

• The agreement may prohibit you from operating a similar business during the term of the agreement.

• Franchise agreement usually grants you a territory. Even though the franchisor may have the right to compete with you in your territory.

• The time period of the initial franchise term is usually about 20 years. Your agreement may not permit you to renew it. Even if you renew, you may have to sign a new agreement with a different set of terms and conditions.

• What is KFC Full-Form? KFC Stands for ‘Kentucky Fried Chicken’. Kentucky is the south-eastern state in the USA.

• The founder of KFC is Colonel Harland Sanders, who was running a roadside chicken fries restaurant in Corbin, Kentucky USA.

• He noticed potential in the franchise model and the first “Kentucky Fried Chicken” franchise began in Utah in 1952.

• KFC was one of the first fast-food chains in America to expand internationally.

• Now, ‘Yum! Brands is the parent company of KFC and it is one of the largest restaurant companies in the world.

• KFC’s famous slogans are “Nobody does chicken like KFC”, “So good” and “It’s Finger Lickin good!”

• KFC is the high capital franchise opportunity in India. The anticipated return period of your capital amount can be 2 to 3.5years.

• With 400 outlets in 100 Indian cities, the KFC franchise is undoubtedly a profitable business model.

How to Apply for the Franchise?

You can apply KFC Franchise by visiting their official website. At the bottom of the home the page select franchise with our option, and fill the application form.

In the application form, you are required to fill details like commercial space size, type of ownership & details, the amount that you can invest, Address of planned space, pics of the location, and other basic details.

After the form submission, if you meet their requirement, they will contact you for the next steps.

I hope this guide to ‘KFC Franchise’ in India will help you get started. If you have any additional suggestions, feel free to mention them in the comments section below.

previousHow to Start a Mineral Water Plant Business in India
nextHow to get Asian Paints Dealership?

2 thoughts on “How to Start a KFC Franchise in India”